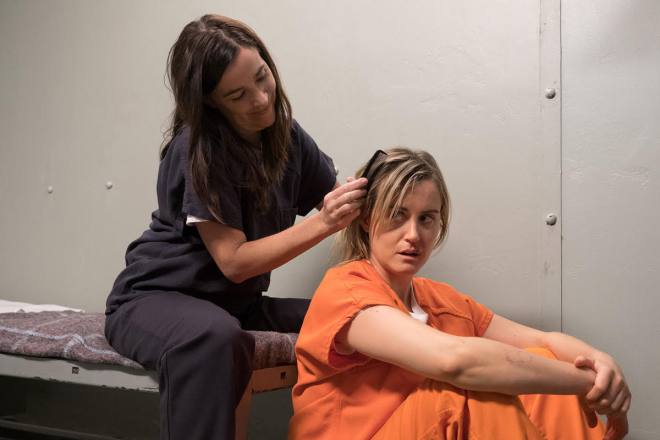 2021 is going away leaving a lot of personal marks. It won’t be a year remembered with a smile on my face. I would like to thank all the people who read eviljenji.com. This site, despite not looking like it, takes work! I do because I believe, believing is the beginning of everything. I wanted to give all my power to believe to people who can somehow continue the Orange is the New Black project. I bring you here today an exclusive interview with a very controversial character: Beth the baby killer. Controversial because in Orange there are many dubious characters, who are mean but worthy of forgiveness.

Beth killed her children, that’s why she’s in prison.

Against this crime there is no pardon. Actress Finnerty Steeves was responsible for bringing Betty to life . I talked with her about the challenge that this character brings (and there are many). After all, how did Finnerty handle this character?

Evil Jenji – -Beth “The Baby Killer” was a loner in Litchfield. Where did you look for inspiration for the role?

Finnerty Steeves – Well, I will say, the nerves that I was feeling as an actor joining this incredible ensemble was already sort of appropriate, do you know what I mean? The whole “oh God, do they like me? Please like me” energy that was pulsing through me was so close to what Beth was wanting from her fellow inmates -so for me, playing Beth was more about stripping layers rather than putting them on. I think because of her crime, she was stunted emotionally so I feel like she was sort of trapped in her younger self. I did do a lot of research about women who had committed this crime. I went down a rabbit hole of heartache trying to understand what could ever drive someone to do this. I also did a lot of reading about postpartum psychosis and that was super helpful. In the past, I’d heard a lot about postpartum depression but I didn’t really know anything about postpartum psychosis. There is such shame around it that many women don’t share their experience and there is not enough talk about it. Those suffering don’t know what is happening to them so they don’t don’t ask for the help that they need.

Evil Jenji -Your role (Beth “The Baby Killer”) is perhaps the least empathetic character in the public opinion of the series. What feedback do you have from fans about Beth?

Finnerty Steeves- It’s interesting because with most of the characters that we follow from Season 1 or 2…we fall in love with them and then eventually learn their crime-Sometimes 3 or 4 seasons later. We had time to connect with them and then once the crime is revealed we love them even more because we realize that we are all one bad friend, bad circumstance or bad parent away from being any of these women. With Beth, on the other hand, we learn her crime right away. We have one scene to sort of feel for her and then BAM! We learn what her crime is. Truly, the worst crime imaginable. I was afraid that the fans of the show would hate her because we didn’t have time to understand her. I made the decision early on that she was someone who loved her children more than anything in the world and that she was overcome with postpartum psychosis and did the unimaginable. In my research I learned that with this disorder there is a complete break with reality and many times the mother thinks she is protecting her child in some way. Often the delusions are religious. The Devil threatening to take their soul for his own, things like that. It is absolutely real to them and many times they think they are “saving” their children. It is heartbreaking and there needs to be more attention paid to mental heath and support and preventative measures rather than just throwing people in prison after the fact.

Evil Jenji -One of the most touching scenes of OITNB in my opinion was played by you last season, when you talk to caputo and thank him, that all people judge you, but that all people deserve redemption. I really love this scene, because Beth doesn’t even give her the right to be looked at, it’s like she doesn’t even exist for other prisoners. Can you tell us a little about the backstage of recording that scene?

Finnerty Steeves – That was my last day of filming for the entire series. Being able to have such a great scene with Nick Sandow on my last day was the best. The writer of the episode, Brian Chamberlayne was on set that day. He also happened to be the same writer that wrote the episode that we meet Beth for the first time. He is an incredible writer and that felt very full circle for me. I was so grateful for the opportunity to play such an incredible complicated character and there we were with official Restorative Justice certificates, Storky’s cheeseburgers and streamers. It was perfect.

Evil Jenji -What do you miss most about Orange?

Finnerty Steeves – Everything! I feel so incredibly lucky. I miss the incredible combination of professionalism and camaraderie. As an actor, any job that I take, I hope that I am lucky enough to have one of three things…. a great role, a great show or the chance to work with great people. Working on OITNB was all three of those. Its just so rare and I miss that.

Evil Jenji -You released a movie recently, can you tell us about it?

Finnerty Steeves- Yes! Last month Gravitas Ventures released a feature film that I wrote and starred in called “before/during/after” based on my seemingly perfect 15 year marriage falling apart. It’s a character driven dramedy with all kinds of amazing New York actors in it (including fellow OITNB cast members Richard Masur and Deborah Rush).  The film is available now in the US & Canada everywhere you normally rent/buy movies and we just signed a deal for international distribution so those details will be coming soon. If you follow us on social or go to our website www.beforeduringafterthefilm.com  you can get more details on where to see it. Thank you so much for asking. Making an indie film is such a crazy labor of love. It feels so great to finally share it!

I can only thank Finnerty for making us understand such a difficult character, and knowing the complexity of creating it. I will keep an eye on your new film “before / during / after”. I’ll see as soon as I can! I became a fan of Finnerty Steevens because it was difficult to understand Beth “The Baby Killer” . Now I can look at her.

I would also like to thank Finnerty for being so kind in accepting this interview. Few actors are willing to talk to a small-scale website. Eviljenji.com is made exclusively for OITNB fans, and these fans didn’t disappear with the end of the series, just the opposite, they are even more in need of information. Did you participate in the series and have 30 minutes of your time to answer some questions about OITNB? It will be a great pleasure, just contact me at bruhnjoice@gmail.com I am a nice person! BELIEVE ME!