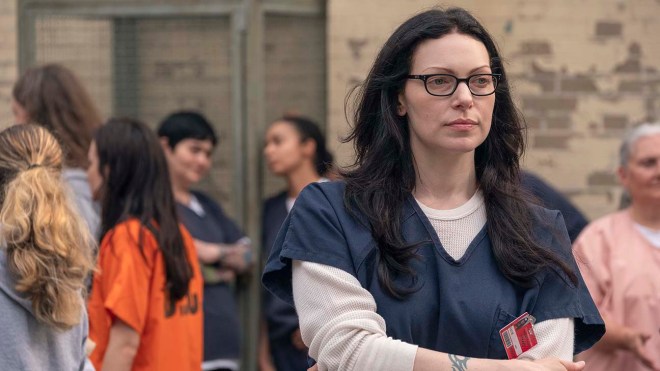 I decided to take a vacation, when this blog completed one year. I started by repeating some posts that I consider above average. The most incredible thing for me is realizing that what I perceive as the best, is not always received by readers in the same way. I love interviewing OITNB actresses. It’s a pretty complicated process to get someone to speak up, but when it finally happens, it’s like I’m responsible for closing the gap between the show and their fans. I’m an open fan of the series, but I’m a journalist too. I ask questions I’ve never seen anyone ask before. And it doesn’t matter if the actress is the protagonist or not. The construction of Orange’s characters is so perfect and complex, it’s as if we know each one. How many series do you know like this? Few, right. Maybe that’s the main reason I find it so easy to write a spinoff of the series, because it would be almost like just letting the character react in a situation. Just build the circumstances! HAHAHA I can’t be that simplistic, it’s a much more complex and organized process. But let’s forget for a moment that it’s complicated to build an engaging and interesting plot. Shall we do an imagination exercise? So follow me in the next few lines, because here the world is what we want it to be.

Every time Jenji Kohan posts photos on instagram, my imagination travels to know what goes through the head of the creator of Orange is the New Black. This house was a photo taken by her while she was walking with Tara Herrmann. I always imagine the two of them together, doing creativity exercises in the construction of some stories. I dream that is the spinoff of Orange!

Well, at the same time I imagined Alex and Piper living in a strange town in the United States, in this house. The city was “Old West” style, and it was as if time had stopped: Few residents, there was no internet and, due to a mystery to be unraveled, everyone there had committed some crime. They went there because a distant relative left the inheritance house to Alex. When she got out of prison, she needed a place to get her head straight, taking Piper along. It was a kind of marriage test, imagining a normal life somewhere they could start their story again. No past! Perhaps there they will mysteriously find Miss Rosa, alive, vibrant, as if she had never been sick. Maybe in the courtyard of this little house there is a marijuana plantation, which will take Alex back to the drug’s world.

I traveled looking at the picture of this little house. How amazing it is to have in your hand the destiny of a story, a blank sheet of paper and characters you already know! Let your spirit soar, Jenji. Throw your energies into the universe!

Do you know how much each episode of Orange is the New Black costed? 4 million dollars. To this day it is considered one of the most expensive series on Netflix.

Do you know what is the most expensive series on Netflix right now?
‘The Crown’ is a historical drama about the life of Queen Elizabeth II, her family and her reign. The production is critically acclaimed, multi-award winning and budget-friendly. With a special focus on the figurines and salaries of stars like Olivia Colman (‘The Favourite’), Helena Bonham Carter (‘Alice in Wonderland’) and others, each episode costs Netflix $13 million.

MORE ABOUT ORANGE IS THE NEW BLACK

Some curiosities about the creator Jenji Kohan.

I read a wonderful article about facts about the life of Jenji Kohan. If you want to read a full article,

She Comes From A Showbiz Family.

Her father is Buz Kohan, an Emmy Award-winning television writer and producer, most well known for his work on The Carol Burnett Show and writing for the Oscars.

Jenji Kohan’s mother Rhea is a television writer who has also done some acting and her brother David is also an Emmy Award-winning television producer. Jenji has worked with her brother David on few projects as well, including an episode of Will and Grace and the unsuccessful tv show The Stones.

She Owns The Historical Hayworth Theatre In Los Angeles

By 2013, after establishing herself as a successful show creator, Jenji Kohan had the freedom to work from wherever she chose and have the office of her dreams.

The eccentric creator found the perfect fit for her new production home when she discovered the Hayworth Theater, a historical building in Los Angeles. She converted the second floor to offices for her production company and uses the notorious theater to inspire her work.

This multitalented creator who wears many hats in the industry actually deals with attention deficit disorder, something that can make it really hard to focus and can often impede productivity. But Jenji Kohan said forget that, and used the disorder to her advantage and made it part of what people love about her.

Her former coworker, who worked for her on Weeds described her as a really fun boss who seems to run an office that’s far from boring. Her energy and her love of cussing make her a relatable boss who creates a positive workspace and whether it’s due to her A.D.D. or in spite of it, she seems like she has found the right balance between having fun and getting stuff done.

She Considered Becoming A Rabbi

Viewers of Kohan’s shows may have picked up on Jenji Kohan’s knowledge of the Jewish community with characters like Andy from Weeds and Cindy from OITNB exploring Judaism. But if it wasn’t for one detail, she might very well be known as the funniest Rabbi around instead of the creator of the funniest characters on television.

According to Jweekly, Kohan was seriously considering going to school to become a Rabbi but was unable to due to the fact that her husband is not a born Jew. The fact that she was denied over such a  technicality alone was enough to steer Kohan away from that goal, and many fans of her work are probably pretty grateful for that.

She Got Fired From Friends

It’s hard to imagine since she is so in demand these days and has more than proven her skill as a writer, but Jenji Kohan was actually let go from one of the most well-known sitcoms on television. She worked on Friends for one season before getting fired for what she speculates was for the fact that she talked too much.

But though she had a hard time getting her ideas across or just had them stolen, it motivated her to want to make her own show where her voice was the loudest and the characters could be however she wanted them to be.

2022 has many challenges for me. Making this blog as good as last year is one of them! Believing in an idea that no one supports you is another. I just remember that when you really believe in something, some magic happens. For you to be a genius, you have to be a little crazy and swim against the current. I definitely don’t want to be good, I want to be more than that. I challenge myself everyday. For me the year starts now! happy 2022, may we start by accepting and overcoming our past.

One thought on “Orange is the New Black: Jenji, New Ideas, The New Beginning”